Steiner Plumbing & Heating Ltd. started in 1979 by Jim and Trudy Steiner out of a shop on their acreage, and one van.

It has grown over the years to 13 full-time employees that cover the entire Parkland region.

Jim & Trudy’s daughter and son-in-law, Chris and Carla Wolfenden, took over the business in 2017 and are happy to continue the family tradition of fair, friendly and quality service.

Steiner Plumbing & Heating Ltd. is proud to be a community minded organization that regularly supports many worthy organizations in the Parkland region. 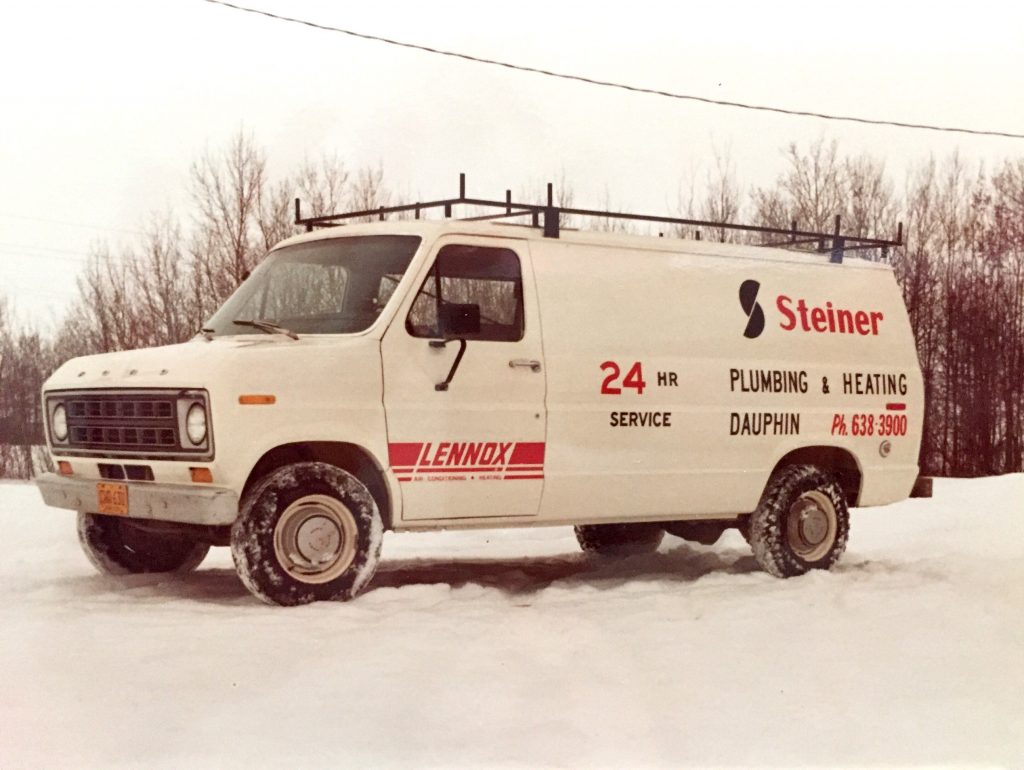 Carla ( Steiner ) Wolfenden – Owner
Carla and husband took over the business in 2017, and are happy to be able to carry on the family business.

Carla grew up in the company and after university, pursued a career in sport / recreation management before returning to Dauphin in 2009.

After a stint working for municipal and provincial government, she started full-time at Steiner Plumbing & Heating and has taken over accounts payable/receivable from Trudy, in addition to marketing and safety.

Carla is the Co-Chair of the 2020 Manitoba Summer Games. 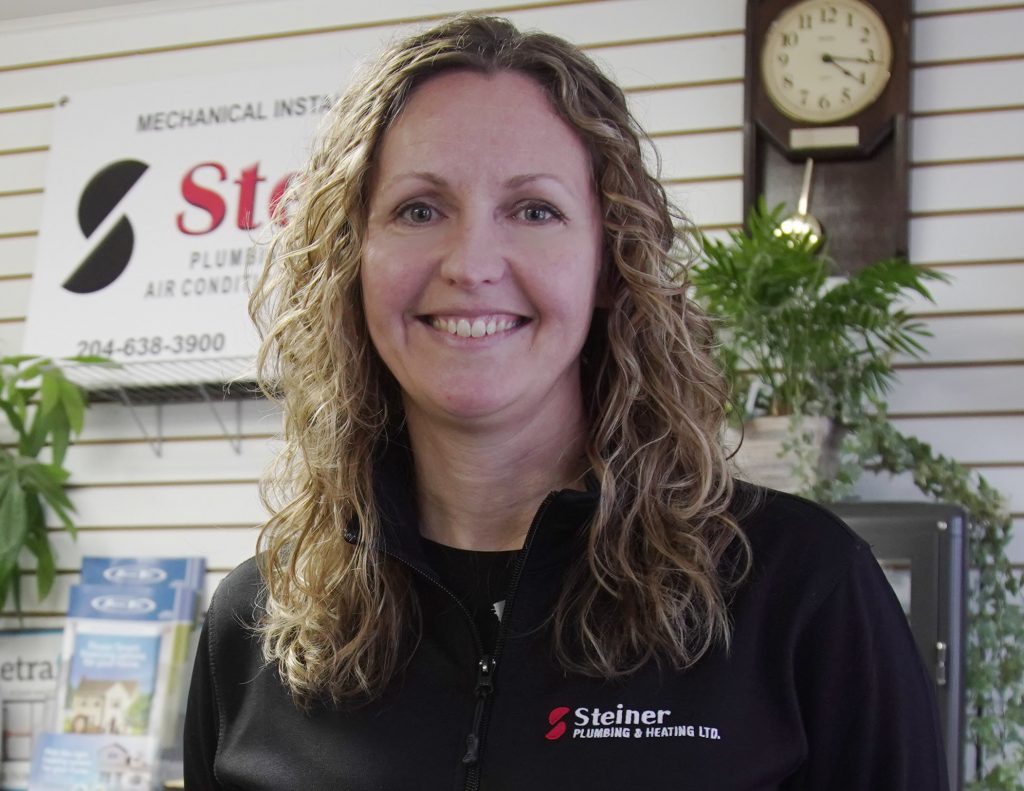 Chris Wolfenden – Journeyman Plumber, Owner
Chris came to work for his in-laws after playing volleyball for Team Canada and professionally overseas for 8 years.

After initially intending to become a carpenter, he was convinced to give plumbing a try in 2009 and was a quick study, winning Manitoba’s top apprentice award after graduating in 2014 and also achieving his WETT certification.

Chris is a community minded individual that is involved in many active living projects in our region. 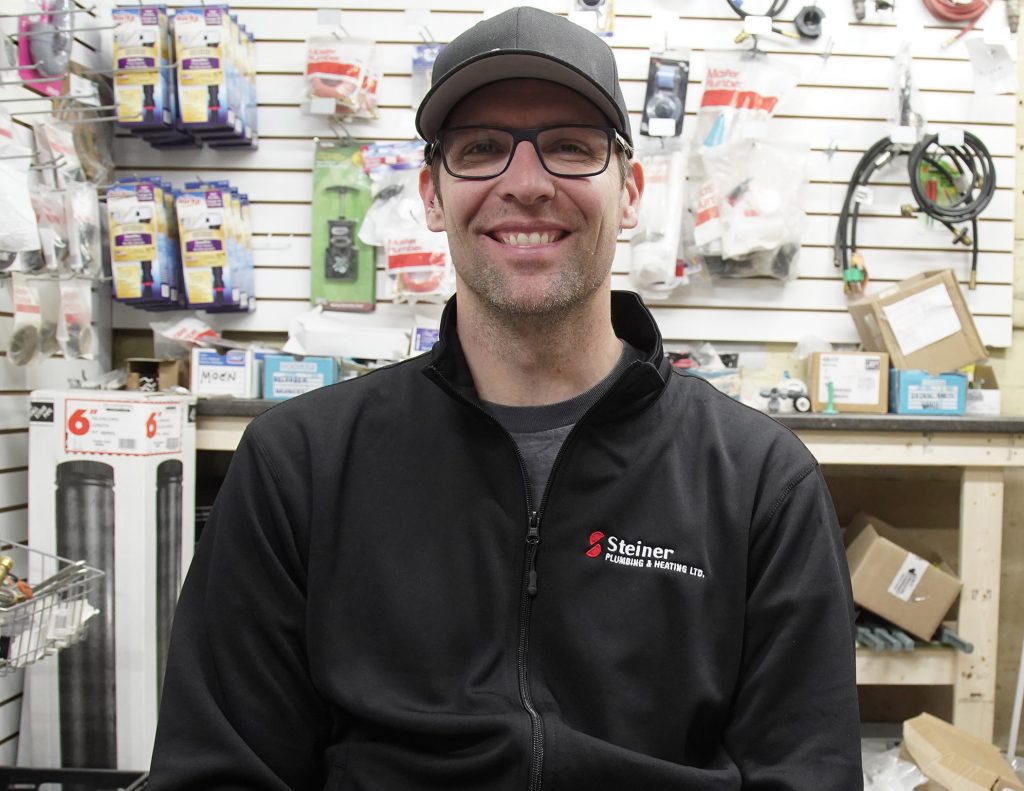 Jim Steiner – Journeyman Plumber, Founder
Jim has been a plumber since learning the ropes from his father, George Steiner, as a teenager.

He became a journeyman in 1973 (Manitoba’s top apprentice) and worked for Risley Plumbing & Heating in Dauphin until going into business on his own in 1979.

He holds his ‘A’ gas ticket and is a great community supporter.

His passion is hockey, and hits the ice at least 5 times a week with the ‘Noon-Hour Hockey League’ and the Dauphin Kinks Old Timers.

He and Trudy retired in 2017, but remains an invaluable asset to the business and still comes to work when he gets the call! 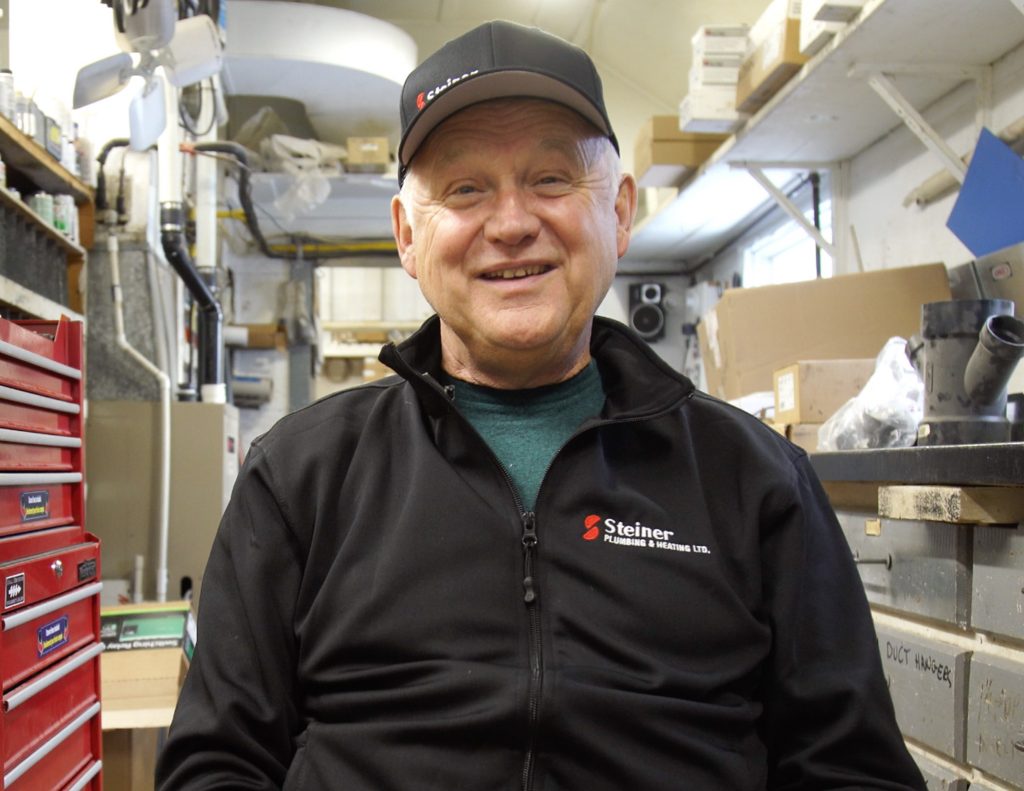 Trudy Steiner, Founder
Trudy was a registered Nurse before “retiring” early to take care of the business end of the company and their 5 kids!

She learned accounting principles on the fly and kept her pencil sharp from her home office and played an important role in the business.

In her spare time she can be found in her beautiful yard and gardens, the cabin, or with her Appaloosa horses. 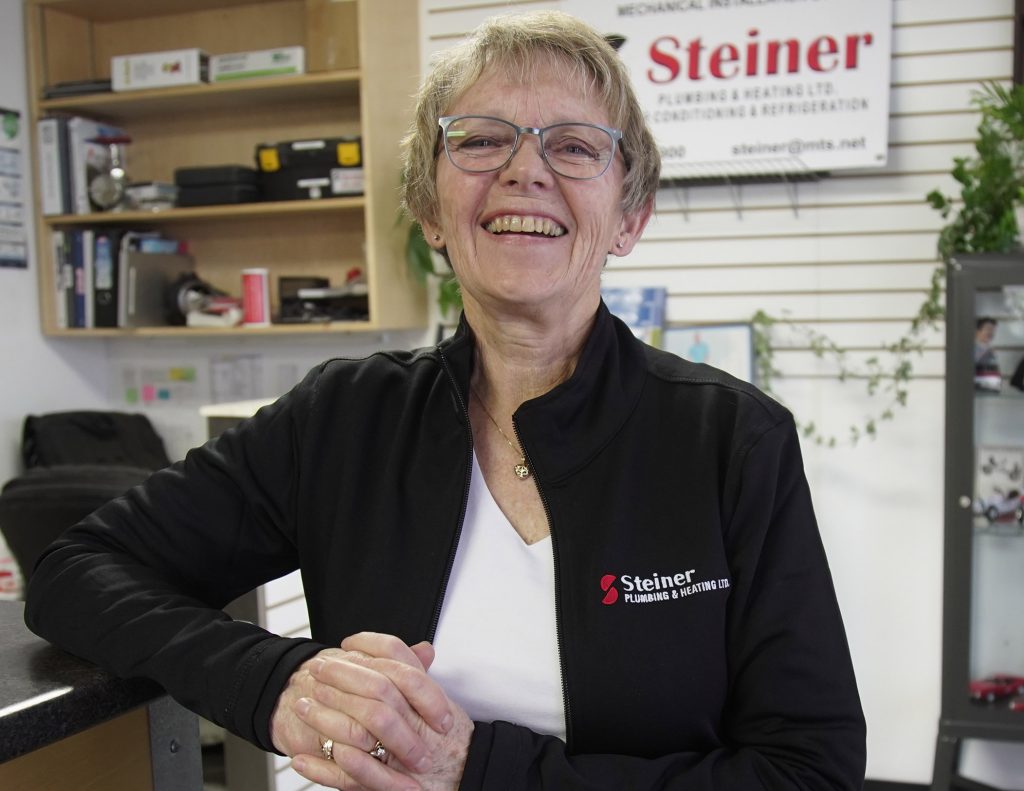 Wayne Steiner – Journeyman Plumber
Wayne is one of many plumbers in the Steiner family, and has worked at Steiner Plumbing & Heating for over 20 years!

His knowledge is invaluable and he is sought after by many of our customers for his expertise and experience in many commercial, industrial, and residential settings.

Wayne and his wife, Carla, have 3 grown children, one of whom (Jordon) who also works in the business. 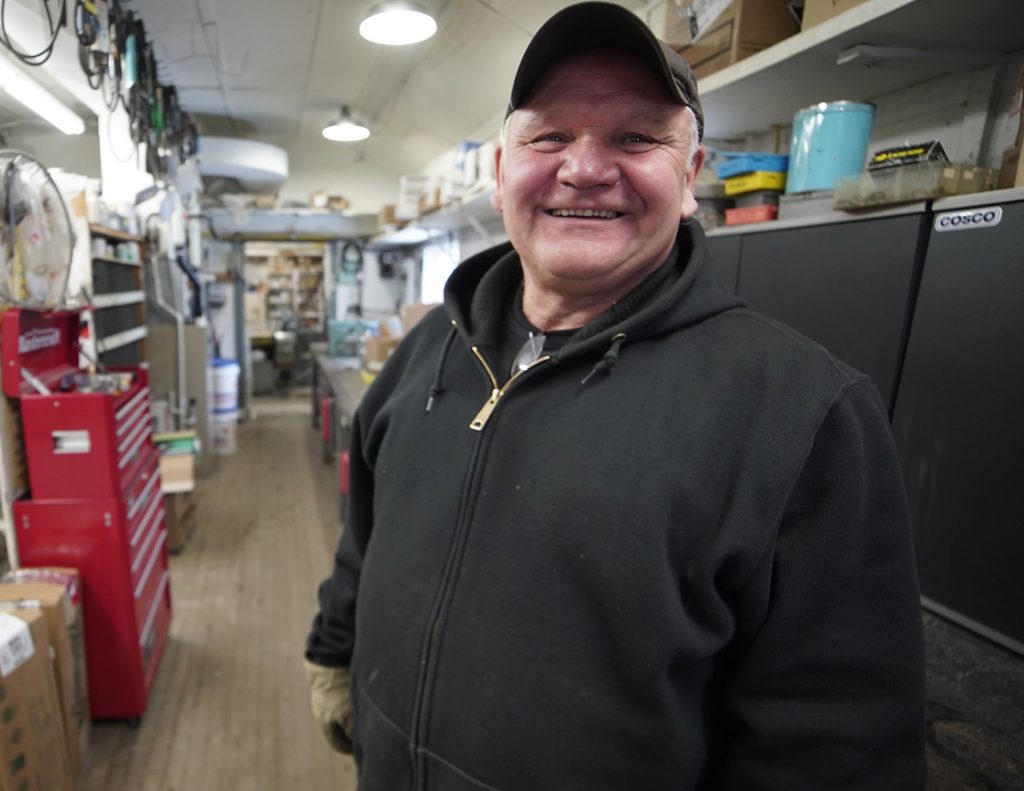 Shaunda Fedoruk – Office Administrator
Shaunda is the better half of Ralph and has been the reassuring voice on the other end of the phone to our customers since 2004.

Aside from keeping our guys in line, she is pretty handy and can often help customers to our shop find even the most obscure items they are looking for!

Shaunda plays a critical role in the efficient and timely delivery of services by our business. 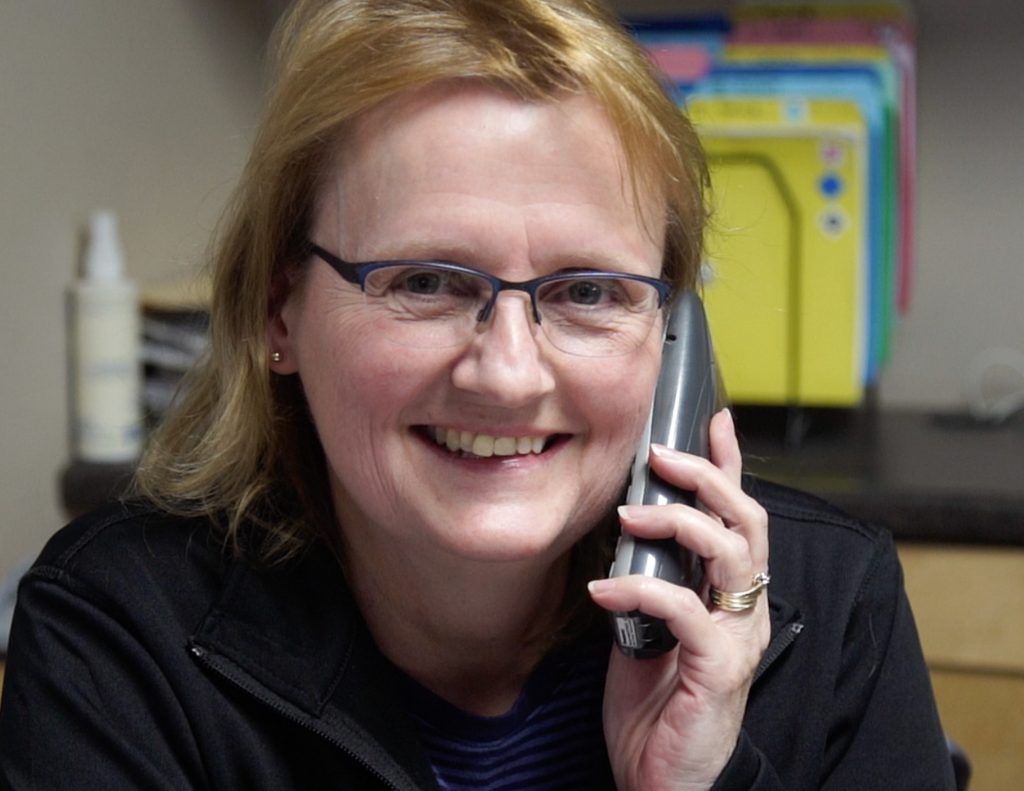 Ralph Fedoruk – HVAC Tech
Ralph was born and raised in Dauphin, and came to us in 2007 from Dauphin Recreation Services, where he was the Operations Manager.

His experience with refrigeration in the recreation facility setting is invaluable, so Ralph works primarily on HVAC systems.

Ralph and Shaunda have 2 grown daughters and enjoy their campsite and fishing at Dauphin Lake. 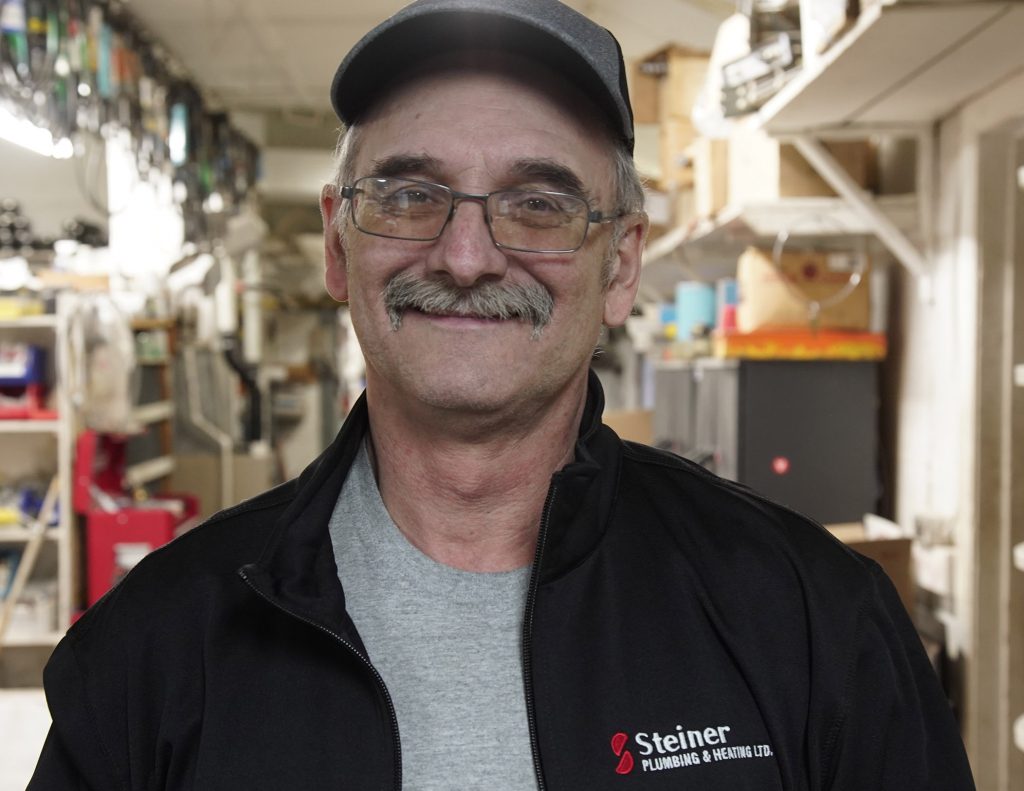 Clinton Baxter – Journeyman Plumber
Clint was with us from 2009 to 2011, and returned again in 2014 after a stint in the big city of Saskatoon.

He lives in Dauphin and has two children: son Cruz and daughter Eva.

Customers ask for him by name thanks to his reputation for doing quality work. 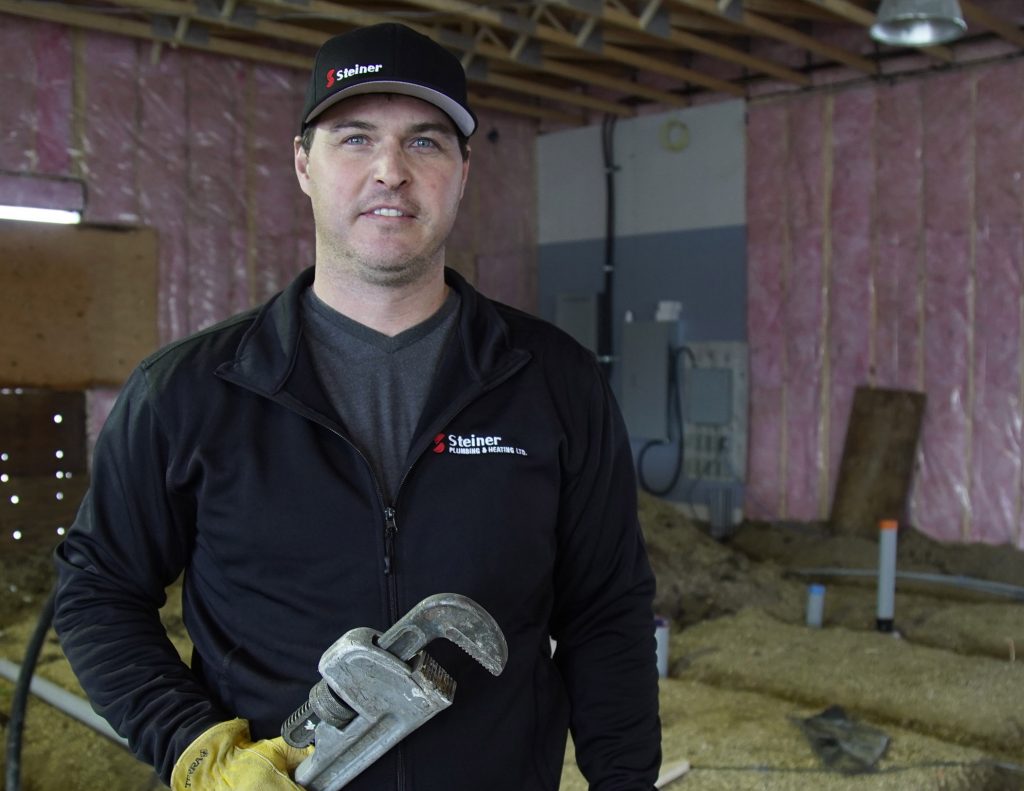 Terry Reed – Journeyman Tinsmith
Terry joined us in 2012 after leaving Squamish, BC to start a hobby farm north of Grandview with his wife, Alice.

Terry is a tinsmith so can often be found in our sheet metal shop making anything from ductwork to custom items, and also doing on-site installation. 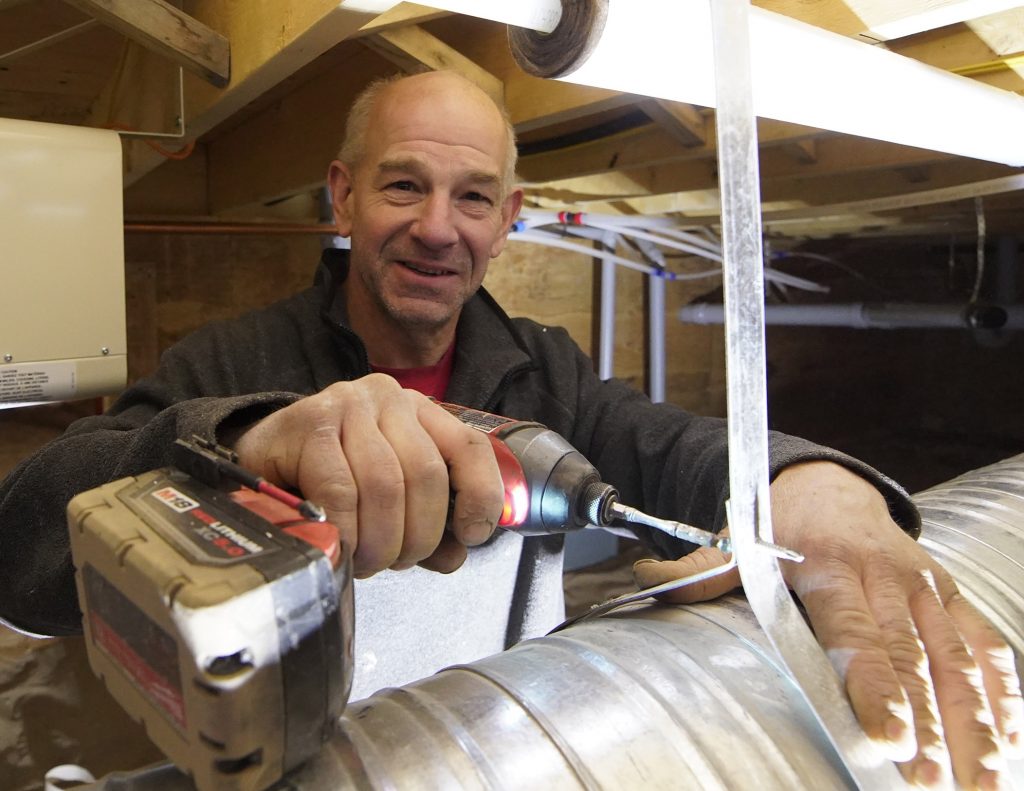 Graham Turko – Apprentice Refrigeration Tech
Graham hails from McCreary and came on board in the summer of 2018 after starting an apprenticeship in Winnipeg.

He is Jordon’s right hand man and is a welcome addition for our growing refrigeration service offering. 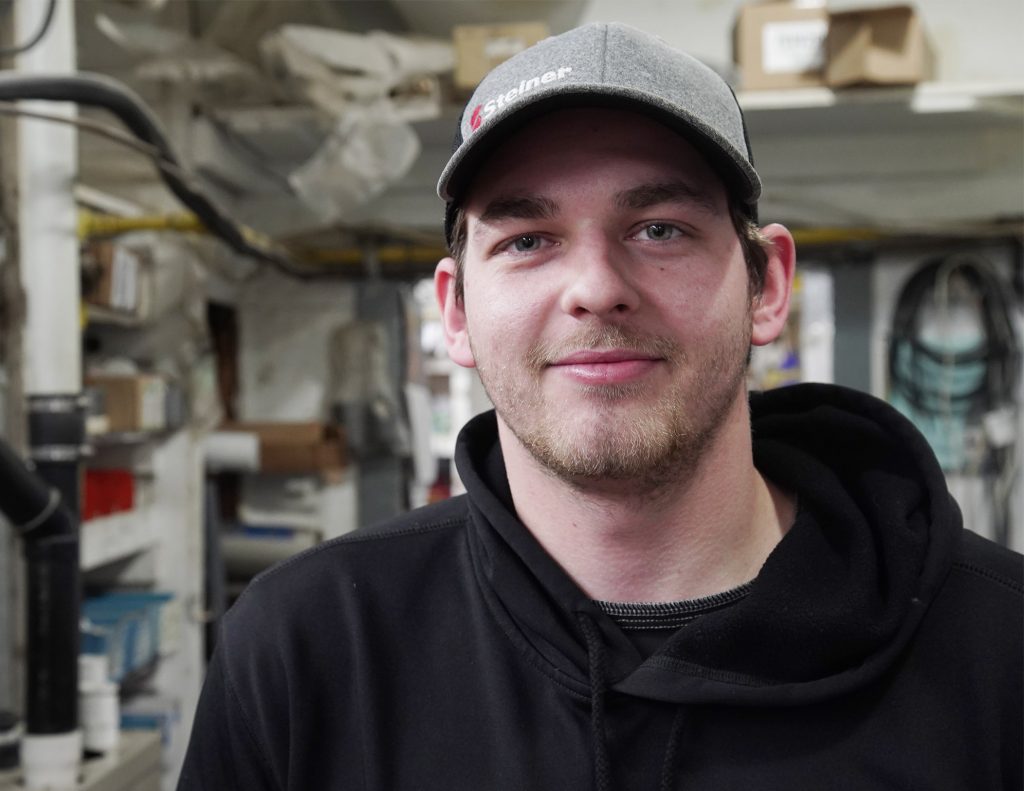 Jordon Steiner – Journeyman Refrigeration Tech
Jordon cut his teeth in refrigeration with us during and after high school, before moving to Winnipeg to do his Refrigeration apprenticeship.

After completing his schooling in January 2017, he is now an integral part of our HVAC team.

Jordon is the team lead on refrigeration projects. 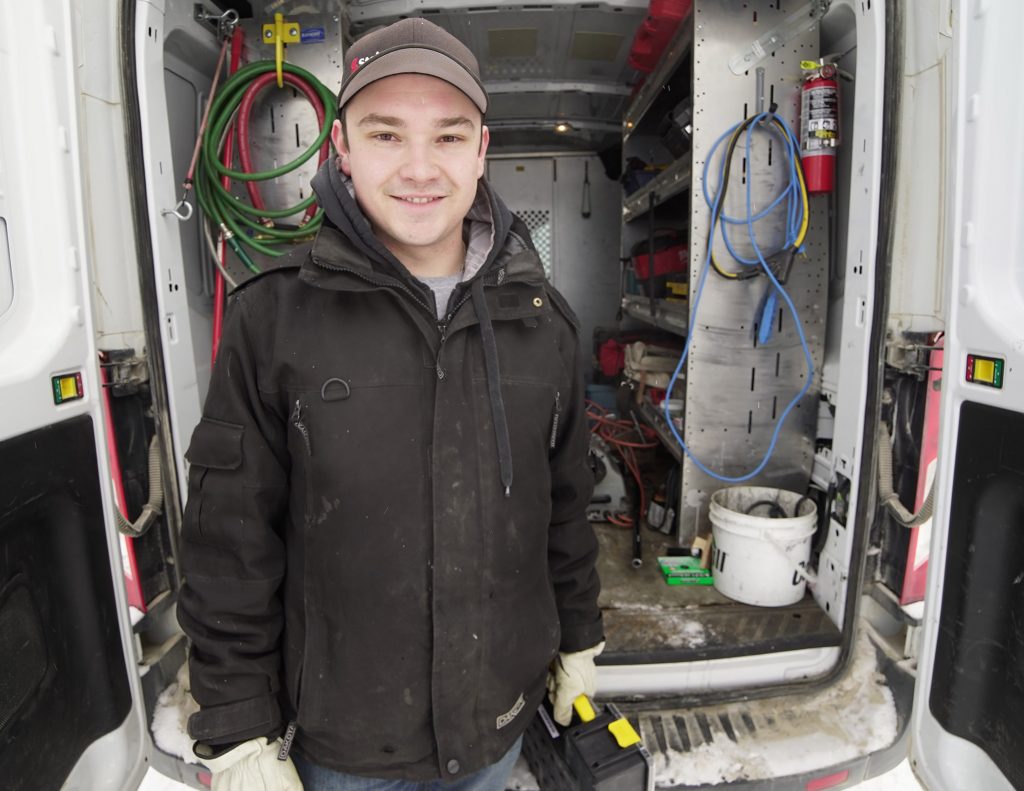 Trevor Geertesma – Journeyman Tinsmith
In December 2016, for the first time ever, we employed a second journeyman tinsmith.

Trevor is originally from nearby Makinak, and was eager to move back to the area from Brandon.

We have kept him busy on some of our bigger projects but will assist on residential jobs as well. 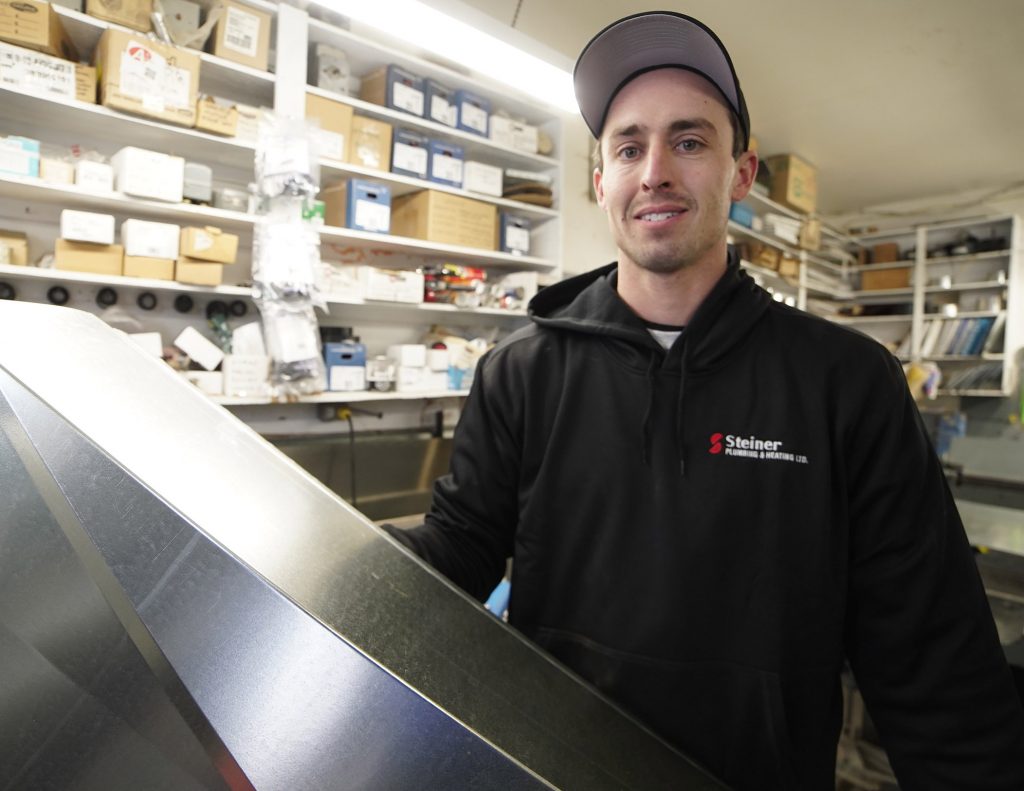 Tyler Derkach – Apprentice Plumber
Former local hockey star, Tyler, came on board for the first time in June 2016 after expressing an interest in the plumbing trade.

He liked what he saw and is now a level 2 apprentice.

Curtis Smith – Journeyman Plumber
Curtis moved to Dauphin with his family and has been working for us since 2013.

He has been with us throughout his apprenticeship and is our newest journeyman, and is handy in a variety of areas thanks to skills learned while working on his family farm in Hamiota.

His wife, Becky, works for Cargill, and they have 2 daughters Dylanne and Kirby.

Jeff Park – Plumbing Apprentice
Jeff is originally from Winnipeg and moved to Dauphin with his wife, Adria and daughter, Aria.

He has worked for us since 2008 and quickly became an important part of the team.

Jeff is one level away from becoming a Journeyman Plumber.

Bruce Forbes – Apprentice Gasfitter
Bruce is from a family with a strong farming history in Dauphin.

After assisting us in the farming “off-season” he has now joined us full-time and is pursuing his gas ticket.

He was born and raised in Dauphin and still calls it home with his wife Angela, and their 3 children.